Hubka Farms Ltd. is a fourth generation farm which strives to produce the highest quality hay available. We have a variety of grasses, legumes or mixtures of hay in round bales or in big squares. Whether you are the horse enthusiast, Dairy Farmer, Cattleman or in the export forage markets, you can find what you need right here.

Hubka Farms was established in 2004 after branching off of the main farm, Hubka Family Farms Ltd., which is owned and operated by Eldon and Cindy Hubka. Cale, (son of Eldon and Cindy) decided to farm and grow more towards the forages while still farming alongside his dad. Growing up on the family farm ingrained in Cale a true passion for the land and lifestyle. Combined Eldon and Cale currently farm approximately 8500 acres of grains, oilseeds, forages and specialty crops.

At the age of 16, Cale rented 80 acres of land, hiring his dad to seed and harvest the crop while he was finishing high school. Two years later, Cale purchased a 480 acre farm and started growing barley, wheat, flax, mustard and a small amount of mixed hay. At age 20, while completing the Engineering Design and Drafting Technology Diploma at Lethbridge College, he purchased his first semi-truck and began hauling hay, grain and other freight for multiple customers and Hay brokers. After Graduation, Cale bought his first tractor and square baler and began custom Haying as well as harvesting his own hay.

Now Hubka Farms markets hay all over North America. Growing and producing over 5000 acres of forages and expanding every year, Hubka Farms has positioned itself to be a leader in the forage industry. 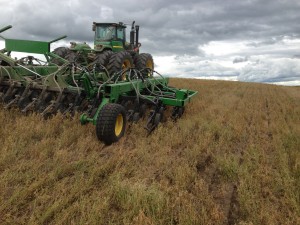